I want to try to make use of this chance to review my knowledge on the algorithm not to forget about it. 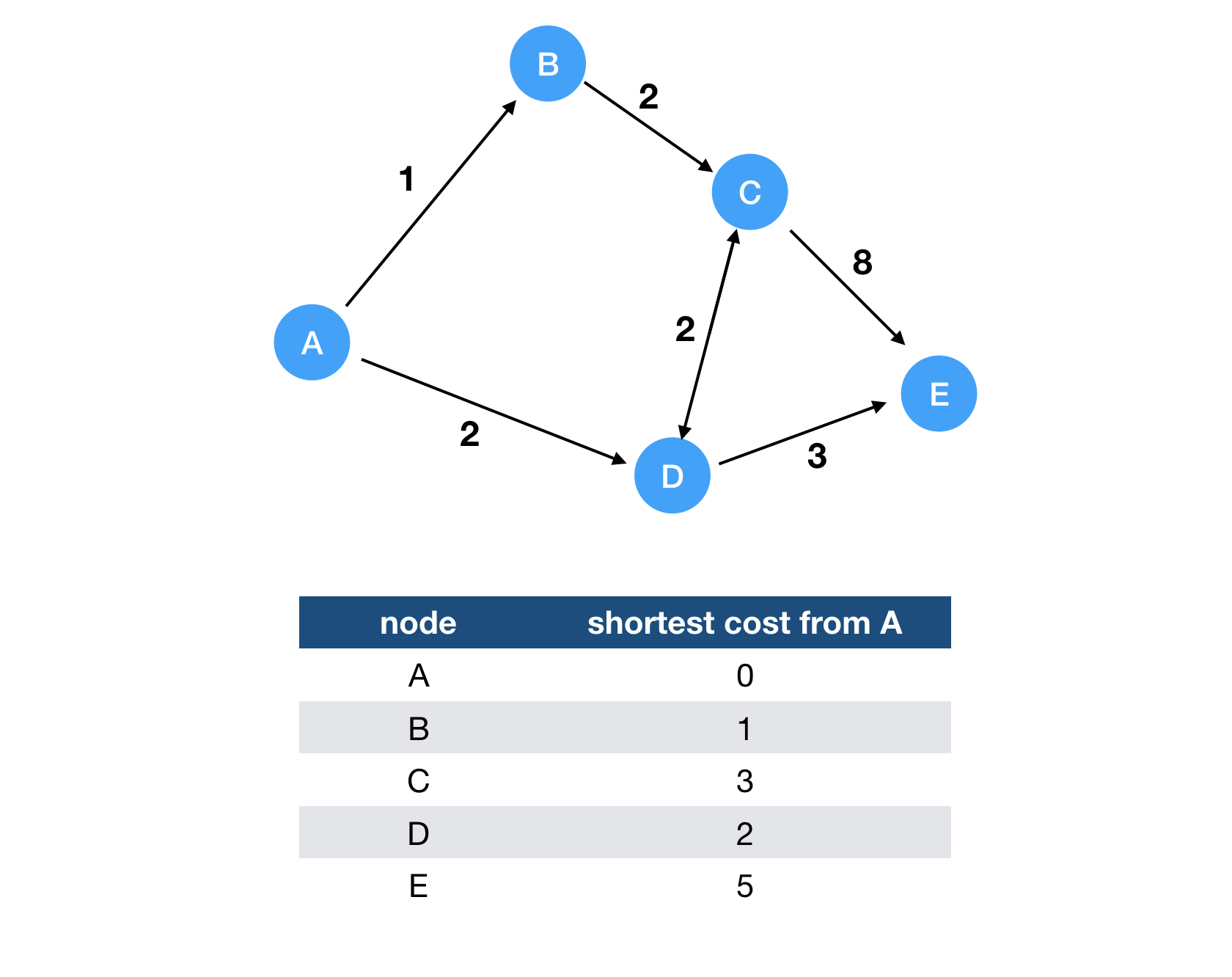 Basically, it is necessary to visit all nodes and edges at most to converge. So the time complexity can be illustrated as follows. V is the number of nodes and E represents the total number of edges.

By exchanging this information, the optimal routing table will be obtained. Here is the pseudo like code to run the distributed Bellman-Ford algorithm.

The algorithm itself is simple. When a node receives a message, it traverses all nodes reachable from the origin node. If the current cost to the node is greater than the sum of cost to the origin and cost in the given routing table, it should be updated. Let’s take a look into how the algorithm progresses. 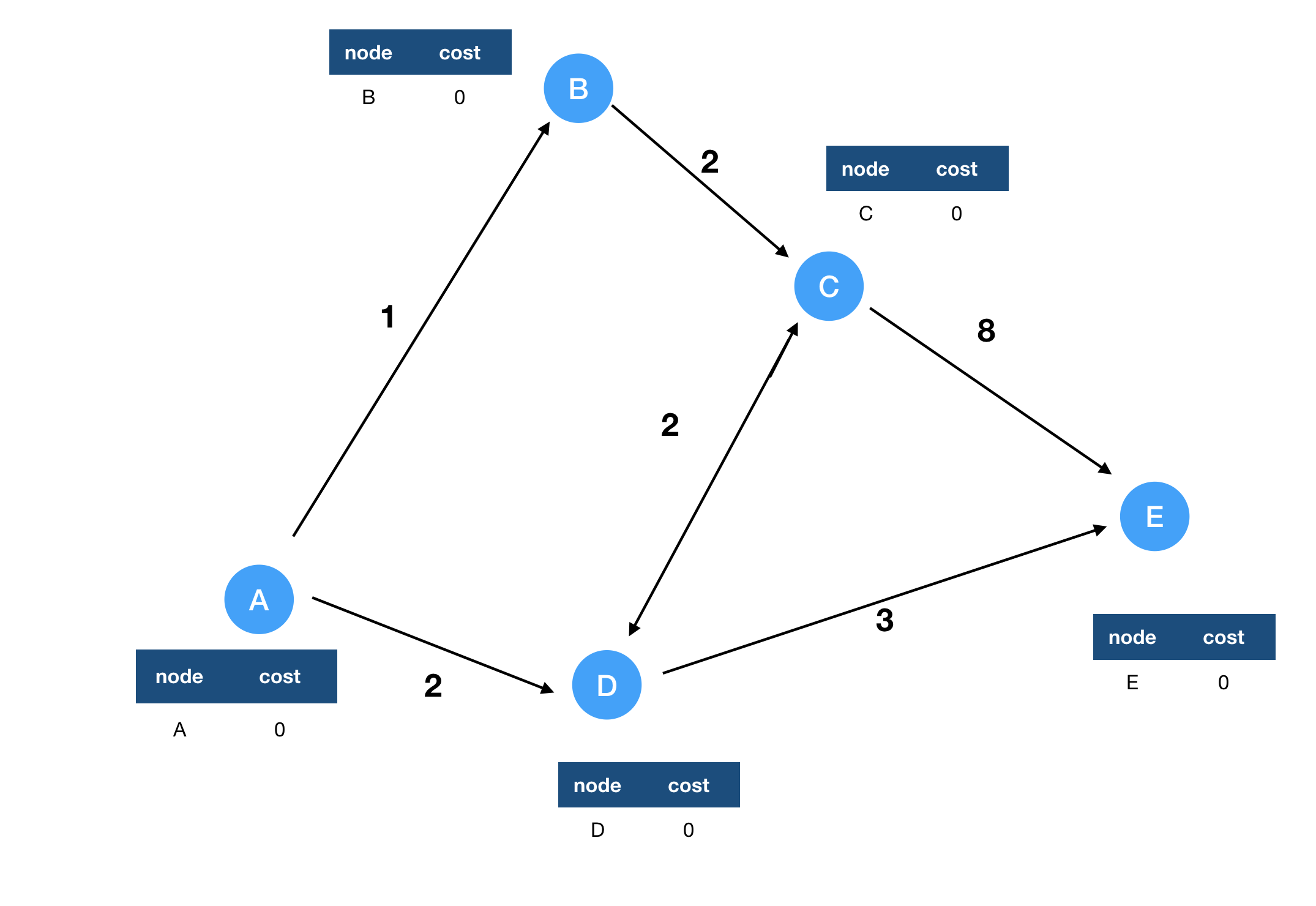 In the next step, node A receives a message from B and D including their routing tables. Then the routing table of A will look like this.

Every other node processes the messages came from incoming neighbors similarly. Then the routing table will look like this overall. 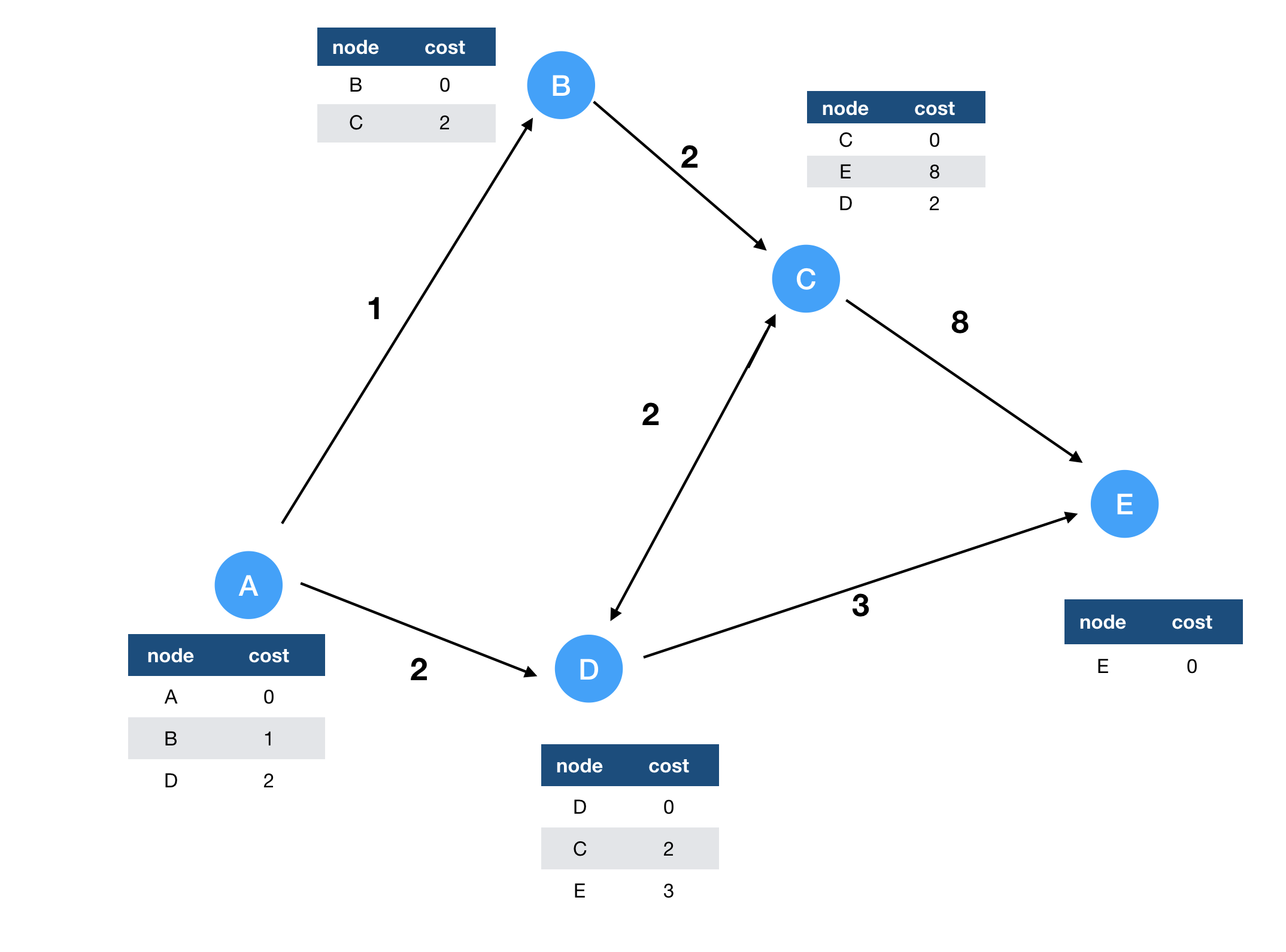 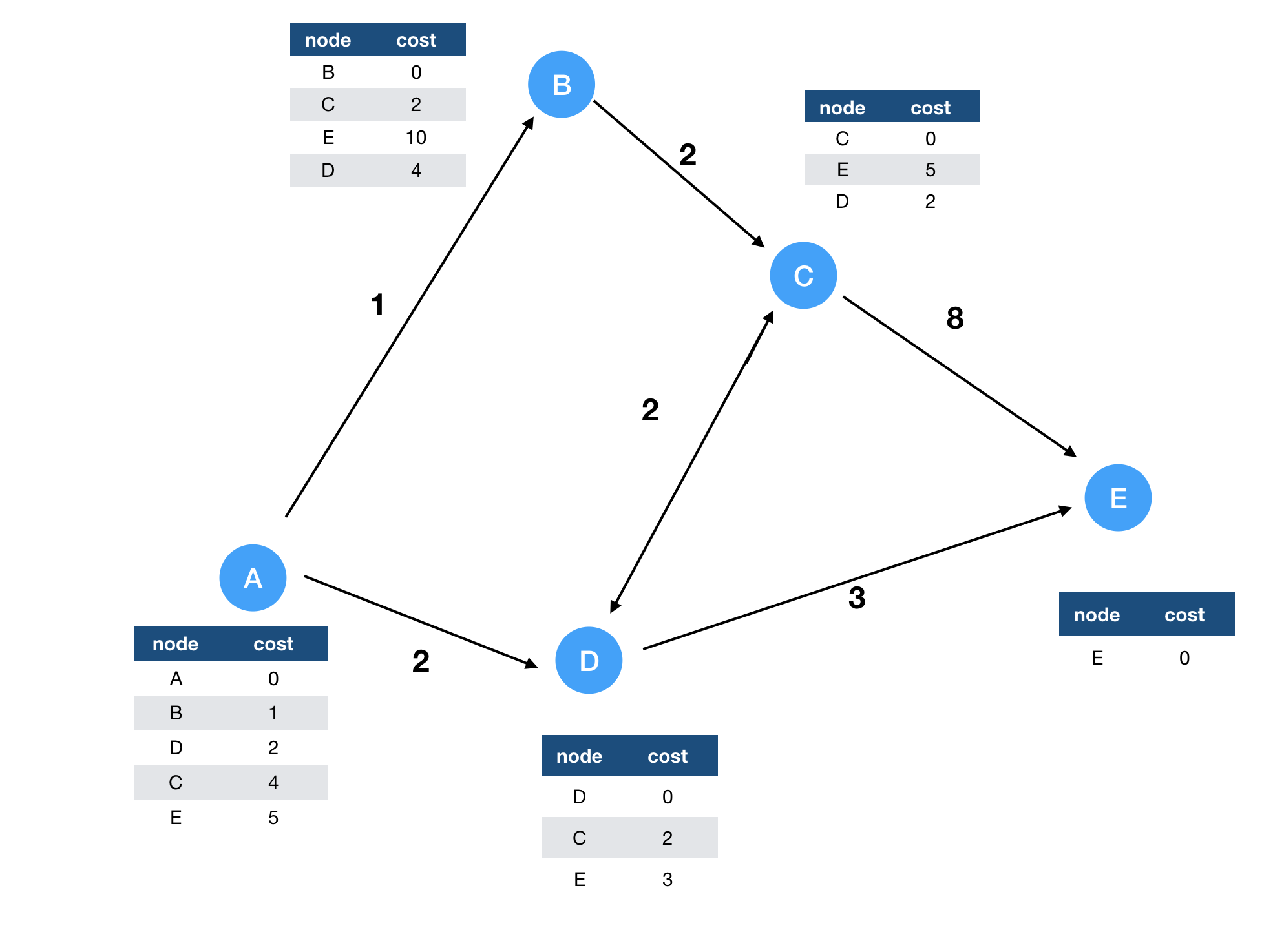 In this case, the routing table is converged as follows. 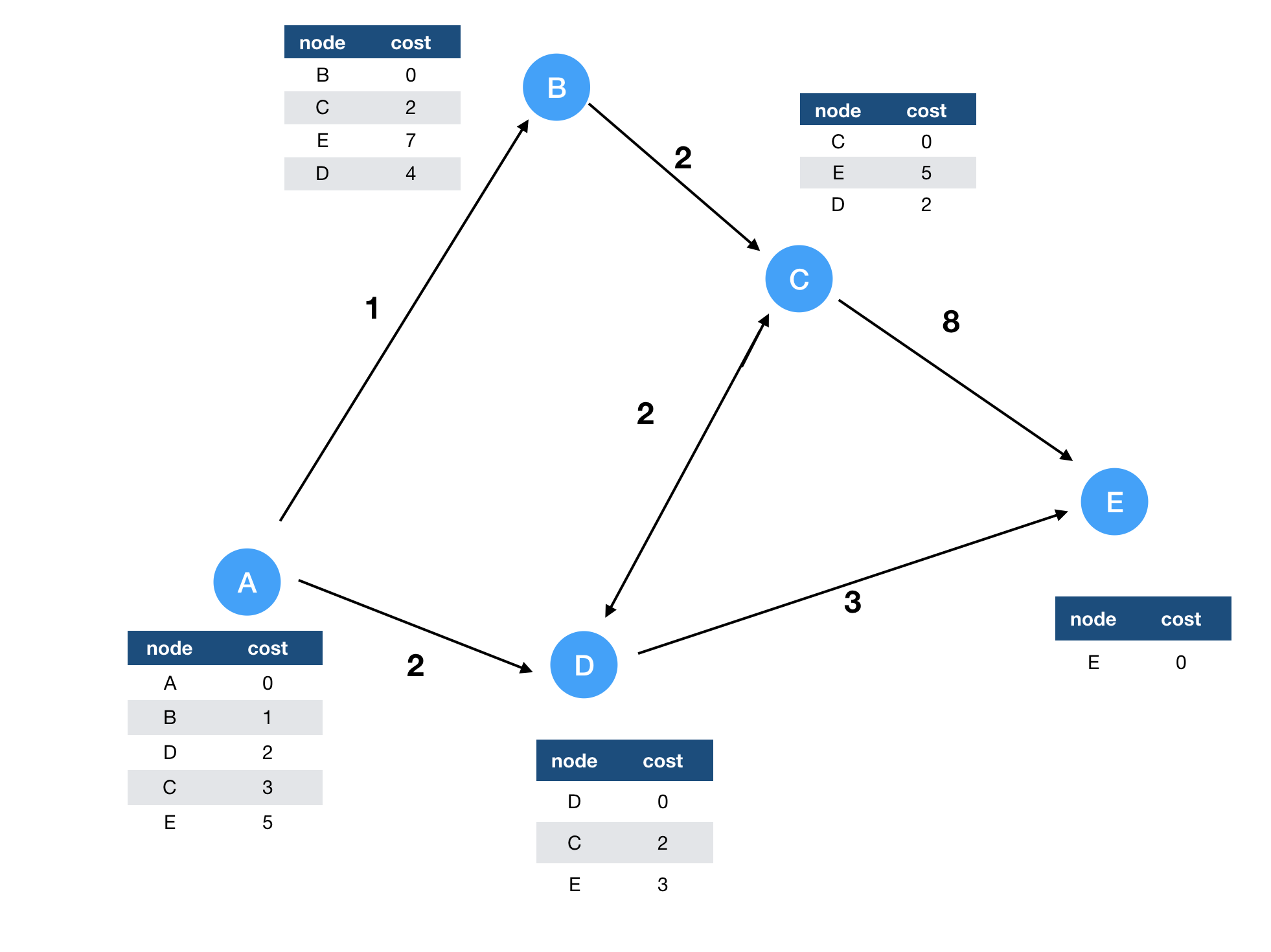 We need to take care of the case of the negative cycle. Unlikely with normal Bellman-Ford algorithm, distributed version cannot handle properly the negative cycle simply because it causes the infinite loop. Each node keeps sending the message each other as long as it sees the updates in its own routing table. If there is a negative cycle in the graph, the routing table is updated forever. In the normal case, there is an upper bound of the number of iterations. But the distributed algorithm does not have such limit so that a negative cycle in a graph can cause the infinite loop. We need to treat them carefully.

“Network Warrior”, Gary A. Donahue provides the concrete algorithm which is used in the real world. The book was helpful to refine my knowledge around the computer network.

Photo by Clint Adair on Unsplash