A few days ago, the second Presto Summit was held at the HQ of Facebook. This is the conference held by Facebook to gather developers and users of Presto around the world. There were a bunch of interesting talks and discussions related to Presto future. Recently, we have seen Presto Software Foundation forked the source code of Presto from the original repository maintained by Facebook. I had a little concern about the situation because it can be an obstacle to accelerate the development Presto and evolve the community. We have seen some discussion related to the problem too. Here is a report about the Presto Summit 2019.

First, we could grasp the current community overview and the situation on Facebook

They are still welcoming the new features or advanced topics from the community. Although Facebook is not so interested in the enterprise features so much, they are likely to accept the patch if the community needs it. (e.g. security, new file format)

Basically, Facebook merges all commits both from internal and external into master so that all members in the community can receive the benefit immediately. Facebook considers them as the contributor in terms of scalability of the Presto. They validate the platform from the viewpoint of scalability by using the huge test suite and large test cluster. Since it’s a little difficult for the community to keep doing such kind of large scale test suites.

That wiki also includes several useful developer guides explaining the internal of Presto. So now Facebook seems to be engaging to contribute to the community and trying to make it much better.

Here is the development plan happening in the near future in the Presto project.

Aria is a project to collect a number of performance-related experiments. One of them is to create a new memory layout for slice and pages used in Presto internally. People who are familiar with the Apache Arrow may easily grasp what it means. That would be able to reduce the memory pressure and CPU usage significantly. Another thing in Aria is an approach to make the push down better. It’s achieved by passing various kind of information to the connector side so that the splits created by the connector can do read skipping accordingly. There is also an interesting plan in Aria, vectorization. Supporting vectorization execution in Presto will make use of CPU resource more efficiently. Overall project Aria will pursue the potential to improve the basic performance of Presto further. 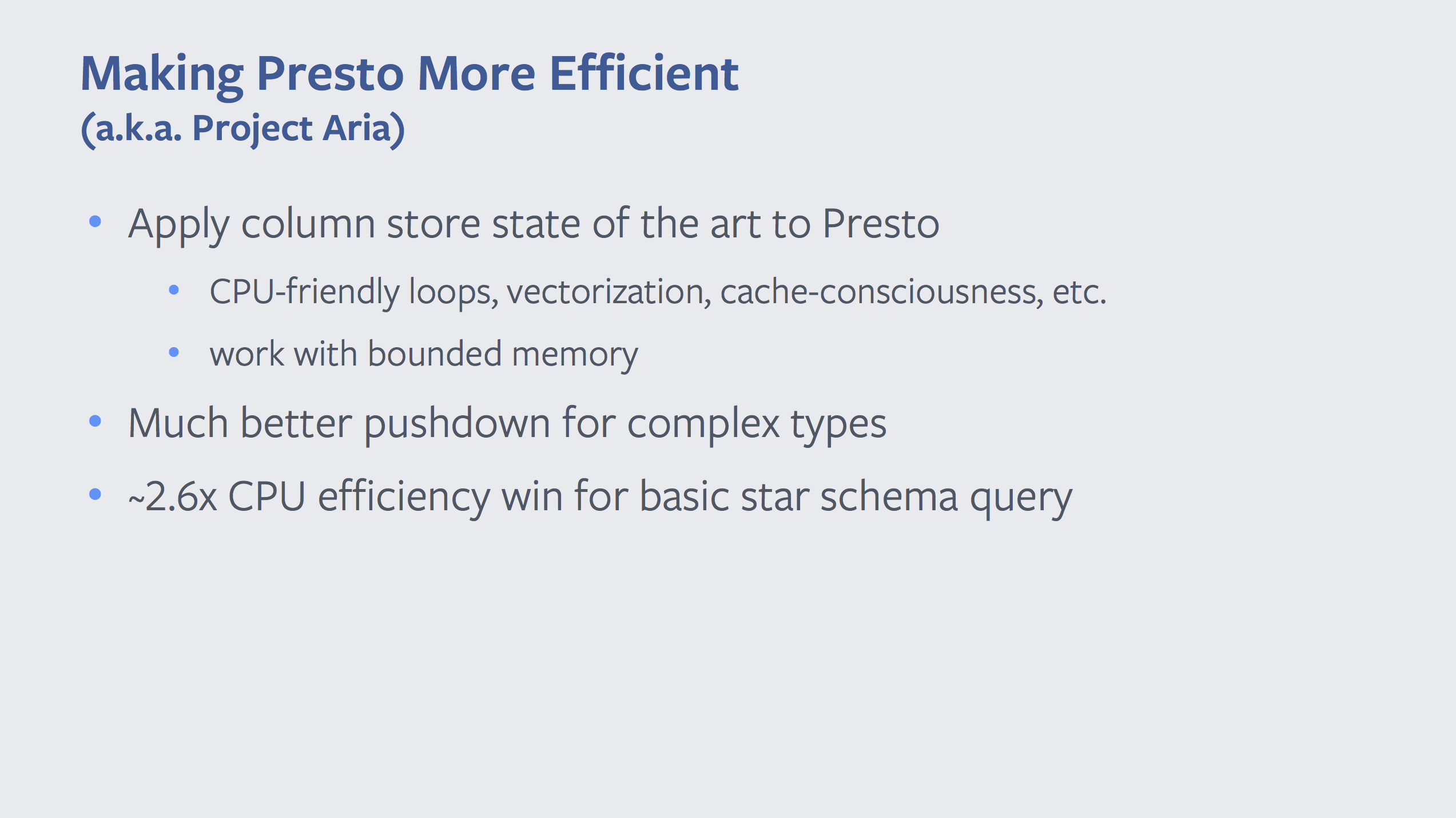 Unlimited is another project to make the potential of Presto wider. It aims to remove the limitation of memory in each node by using materialized exchange join or aggregation operators. Since the join or aggregation are operators which consume a lot of memory and they tend to hit the local memory limit. Once an operator hits the memory limit, the whole query execution fails in Presto. In order to improve the reliability of query execution, partial recovery will be also introduced so that Presto can retry the part of the task instead of the whole query execution. Presto unlimited project will be able to eliminate the limitation in terms of memory and fault tolerance.

Additionally, we can hear several interesting use cases of Presto in big tech companies.

All slides are now available the wiki of GitHub. If you are not faimilar with Presto, “Learning Presto DB - Training DVD

” will be a good resource to listen. Unfortunately, there is not so many books to learn about Presto. But it would be helpful to get started.